Surprises that can be found when treating an artifact

A wonderful printed cotton Palampore "quilt" from the collection of Doris Duke is at her home Rough Point in Newport, Rhode Island.  The late 18th century palampore, was treated here at SAC studio. Palampore is a textile that is, according to wikipedia:

"a type of hand-painted and mordant-dyed bed cover that was made in India for the export market during the eighteenth century and very early nineteenth century. Only the wealthiest classes could afford to buy palampore; therefore, the few examples that have survived are often quite valuable today. Palampore were primarily exported to Europe and to Dutch colonists in Indonesia and what was then called Ceylon. A palampore was made using the kalamkari technique, whereby an artist drew designs on cotton or linen fabric with a kalam pen containing mordant and then dipped the textile in dye. The dye adhered to the cloth only where the mordant had been applied. This lengthy process had to be repeated for each color in the design. Small details were then painted by hand on the cloth after the dying process was completed. Palampore patterns were usually very complex and elaborate, depicting a wide variety of plants, flowers, and animals, including peacocks, elephants, and horses. Because a palampore was hand-created, each design is unique."


This particular Palampore is unique in that it is not in the one-cloth tradition like the example above. Instead, the bedspread from Doris Duke's collection is made from many printed fabrics that have been pieced together. It is edged with a striped woven tape and lined with a buff colored twill-woven cotton textile.


The obverse is made up of four different printed cottons; a central square and three concentric borders. The central printed fabric is square with a central oval design of two nesting birds in a rose bush, there are also two deer and two water birds and a broken column. The oval is flanked by floral and foliate motifs forming a square. This central motif is then bordered with three repeating printed motifs. The piece is printed in shades of brown, pink and blue-green.

The border is made up of twelve pieces of three different patterned textiles. The pieces are hand stitched together to form concentric squares. The pieces are mitered at the corners. All are stylized foliate designs of red, pink, blue/green and undyed cotton.

The bedspread is padded with a layer of woven napped cotton between the obverse and lining, this has been pieced vertically with machine stitch. Large herringbone type stitches have been worked in a white synthetic floss thread to the obverse, tape and reverse to hold the layers in position. This is padding and construction is not contemporary with the original construction of this bedspread.

The dark brown printed areas are quite deteriorated and had been actively deteriorating. Evidence of several previous attempts to fill the losses were found. In the image below, the use of a black pen or marker can be seen at the neck of the deer. It now is edged in white, as more of the original fabric is lost. In other areas, stitching with black thread was used. 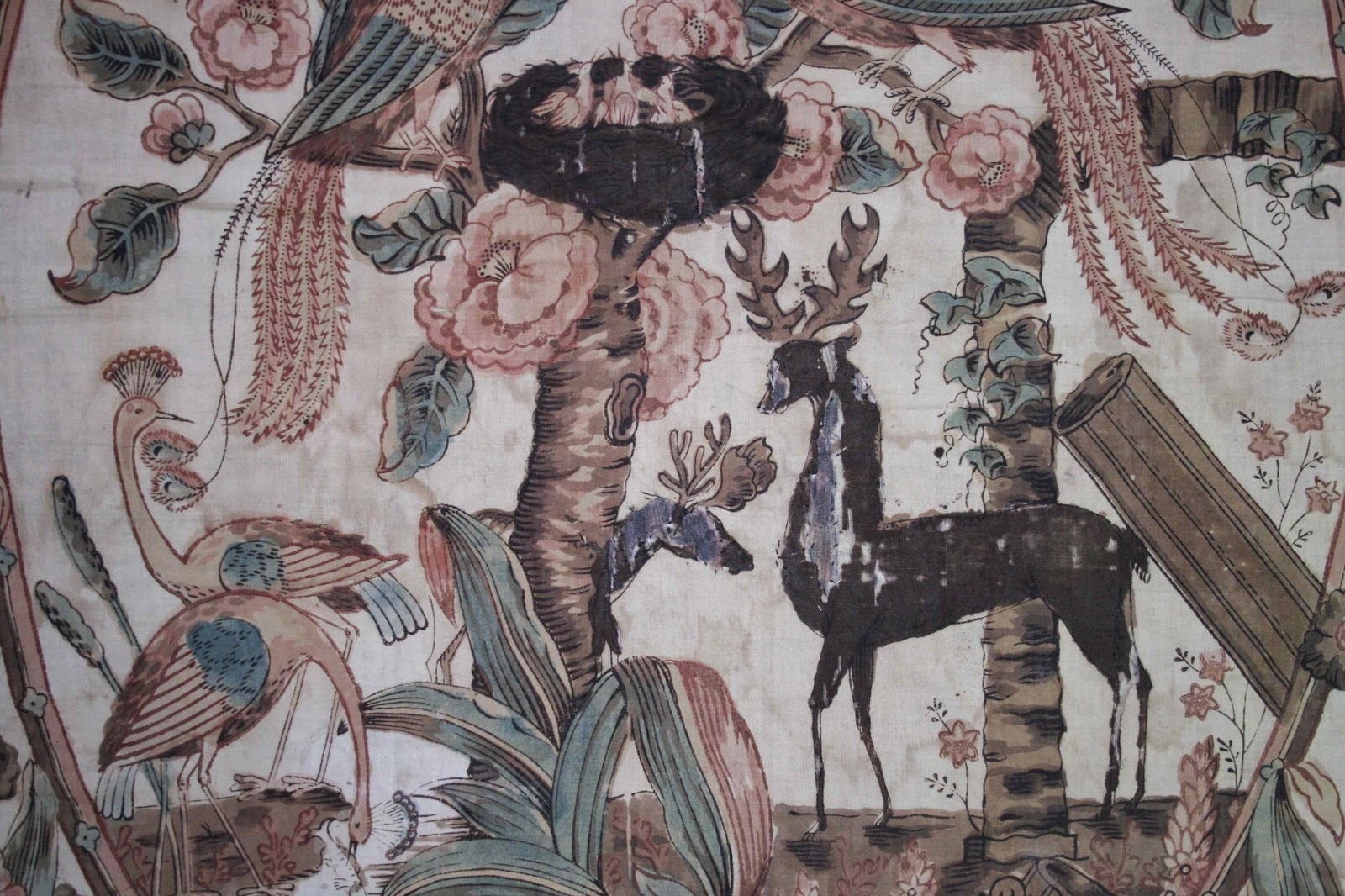 The bedspread was in fragile condition. The printed colors were faded and the cotton was brittle. The dark brown printed areas were especially brittle resulting in the powdering of the cotton fabric in these areas, it is likely that the mordant or dye stuff used to produce this color was acidic, therefore causing breakdown of the cotton. This type of damage is accelerated by exposure to light. The bedspread is creased and is cockled and distorted, due to its pieced construction, tape edging, and its former day-to-day use.

The central fabric was quite faded, reducing the impact of the design. This fabric has the dark brown printed areas, many of which are showing areas of loss. There has been an attempt to fill in some of the larger areas of brown, the deer, in the oval. There is a repaired area of loss along the top edge in an unprinted area. There are numerous waterborne, tide-line stains across the surface of the textile.

There are a series of round, brown stains on the proper right bottom corner on the two innermost border fabrics. Where the stains are located is where the cotton is breaking down or has been lost. Two large splits in the second concentric border were present, one on the proper left side and one along the bottom edge. This fabric was also faded and yellowed, as a result of exposure to light.

The outermost border best illustrates fading as it has a red ground and appears to have been protected from light at the corners, top edge and proper right side possibly indicative of its use on a bed.

Why was it used? The color apparently was not correct, as that a dark pen was used in the losses.

Could this fabric have been a scrap from a previous decorating scheme of Doris'? The curator had not recognized it, but something could still turn up.