While flag day probably conjures up images of our National Flag, perhaps it is also a day to shed some light on the rich history of flags created for military regiments, namely the United States Colored Troops (USCT).

A few years ago Spicer Art Conservation treated an unusual National Flag from the 4th United States Colored Troops (USCT) belonging to the Maryland Historical Society. The treatment was the topic of a presentation and paper given at the August 1-5, 2011 Washington Flag Congress. [The concurrence of the 45th annual meeting of North American Vexillological Association & the 24 International Congress of the Fédération Internationale des Associations Vexillologiques ]. The 4th USCT is a spectacular flag with a double sided canton. The flag, composed of silk and hand painted on both sides, had many areas of tearing and shattering. Following treatment the flag was to be mounted with a window on the reverse side to view the obverse of the canton.


Treatment of the 4th USCT flag sparked interest in knowing the whereabouts of other surviving flags of colored troops. African American men fought in the Revolutionary War, War of 1812, and Spanish American War; however, these men were not limited to segregated units. The USCT only refers to the troops serving in the Civil War conflict and the Regular Army’s segregated troops that were created in the wake of the success of the USCT. It is not until 1954 when the formal desegregation of the armed forces was completed with the abolishment of the last segregated unit in the wake of President Truman’s 1948 Executive Order 9981.

And while each Civil War unit had their own flags, it is the USCT flags are special because of the individual and unique sentiments often expressed on them, often stylized to represent the unit and what it was fighting for. Many of these flags were hand made and painted by the community from which the unit came. Many of the flags featured a different image on each side.

Their are few flags of the USCT that remain. The New York Military Museum has two from the 26th NY regiment, others are in historic societies or belong to the state from which the regiment originated. But mysteriously, there are several other flags that are mentioned as existing, yet these flags are lost to us in that their current whereabouts is unknown.


Research shows us that the Civil War USCT regiments consisted of: 7 cavalry, 13 artillery (light and heavy), one battery, 144 infantry, and 2 brigade bands. While it is unclear if each of these units had a locally made flag, we know that per regulations, each unit should have received a Regimental and National color or standard and with guidons and flank markers where appropriate. What we do not know is how many of these flags have survived; where are they located and what was their design?

This is not a history, but rather an attempt to locate and create an inventory the surviving USCT flags. Any assistance with providing missing information, particularly of the flags that are thought to be lost or lack any information, would be of great help. It is apparent that these flags are of great interest in flag collections, but appear to be focused on separate groups, often isolated and difficult to locate. Here we hope to be able to have a place to gather images and locations of all the surviving flags. We welcome your help in this project.

The first documented flag created specifically for black troops was the “Bucks of America” company color, which was presented to a militia of free black men in honor of their valiant service in the Revolutionary War. This particular flag is not the flag these men carried in battle; instead it was a presentation color, given to the unit in recognition for their service. It appears in the book Standards and Colors of American Revolution by Edward Richardson (1982).

During the War of 1812 there does not seem to be any record of an African American unit. Instead they served in the regular army, in mixed regiments, but primarily in the 26th Infantry which boasted 247 black enlistees. There were not any specifically segregated units. Conversely, there is abundant evidence that the fledgling U.S. Navy was desperate for sailors and many of the African Americans who served were simply incorporated onto the ships they were needed on, regardless of color. Visit PBS to read more on the story of the black sailors and soldiers of the War of 1812 and watch the video link there. Link: http://www.pbs.org/wned/war-of-1812/essays/black-soldier-and-sailors-war/

It is during the Civil War when most of the exclusively black units were created. In 1863 The United States Department of War created the Bureau of Colored Troops. Most well known of these units is perhaps the 54th Massachusetts Volunteer Infantry whose story was the basis for the award winning 1989 movie “Glory”. But the 54th is just one of 175 regiments that were organized in 1863. So how many flags from these units still exist? Some sources say less than 25.

Prior to the USCT there were State Volunteers and the Corp D’Afrique, many of which were federalized into USCT units. An example is the 12th Corps that became the 84th USCT; a flag survives from each period. All of this makes identifying flags more confusing.


A sad discovery is the apparent loss of the flags from regiments from Pennsylvania, which had 11 USCT Regiments. Their beauty is known by the surviving black and white photographs, copies of which are located at the Library of Congress. David B. Bowser, an African American artist, painted several of these.

Richard Sauers wrote in his book, Advance the Colors! Pennsylvania Civil War Battle Flags that many of the USCT flags made their way from the State Mustering office in Philadelphia (where a flag was held for safe keeping) to the War Department for storage. In 1906 they were transferred to the Museum at West Point. Documented in this transfer are the flags of the  22nd, 25th, 32nd, 43rd and 127th USCT.  By the start of WWII storage had become an issue, and the condition of some flags had become so poor that they were discarded. Sauers mentions that only one flag identified as a Pennsylvania USCT remained in the museum in 1940, but he does not state which one.

Besides the USCT flags of the State of Pennsylvania, not many flags are as well known or documented. The following list is what is known to have survived (listed in order of Regt. Number) and its location. Where possible, a photo is included. 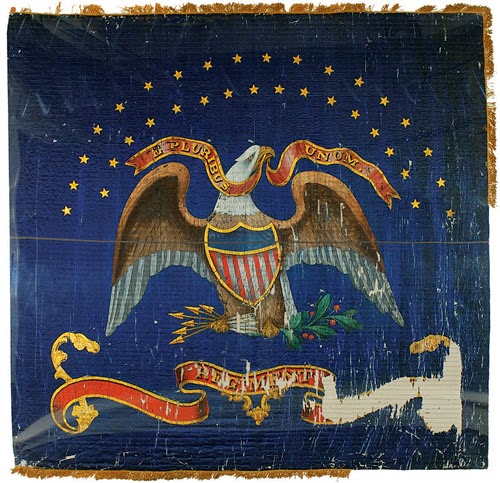 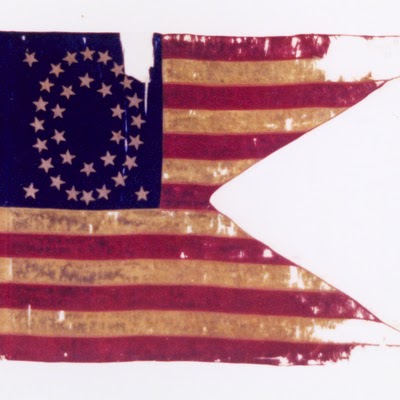 The Kansas Historical Society has six flags from the First and Second Kansas Colored infantries. This is one of the largest collections of surviving African American Civil War flags in the nation. 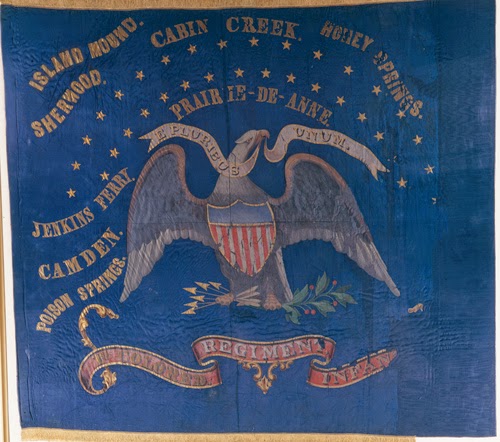 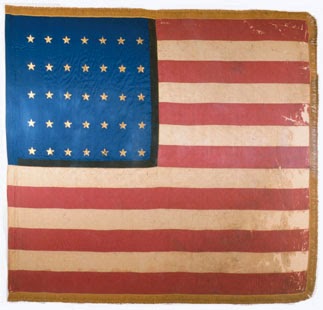 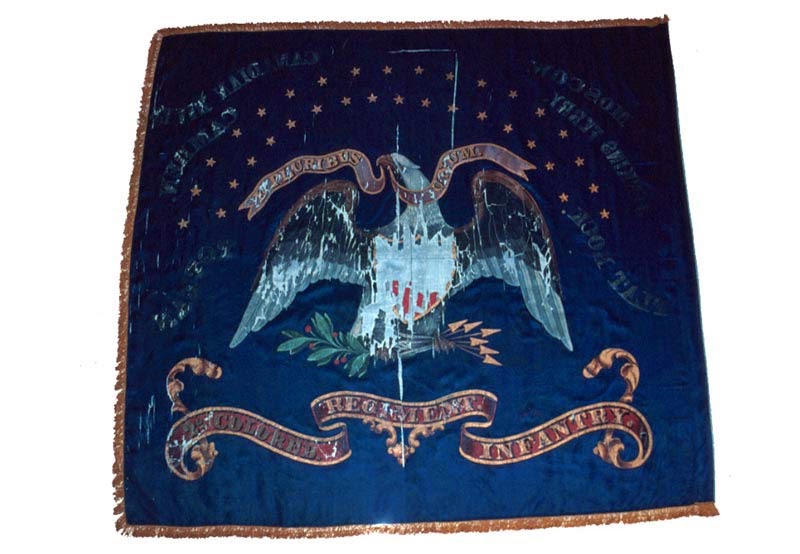 The Confederacy did have units that included or were composed of blacks, working in a range of capacities but none are known to have had distinctive flags, and the only 1865 period press description describes the Confederate national flag. We would be interested in knowing about these.

After the Civil War, specifically black infantry and cavalry units were raised. These units served with distinction during both the Indian Wars & the Spanish American War, and the Philippine Insurrection. They were often referred to as “Buffalo Soldiers”, an appellation originated by the Native American Indians as a tribute to their fighting prowess. One surviving flag is the 10th Cavalry, located at Fort Sill, Oklahoma. 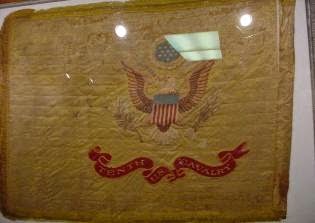 Twentieth century flags are more standardized with less variation in design and construction than those of earlier centuries. Examples of the surviving colors include:

WWII – Are there any flags from the Tuskegee Airmen?

Further research about individual USCT soldiers can be found here
http://www.archives.gov/press/press-releases/2013/nr13-98.html - This is the National Archives press release and info about the 100% complete records of every USCT soldier. An impressive undertaking and an unparalleled resource for listing each individual from the units who served. If only it came with images of the flags for each unit. The link provided on this page is to the site: http://www.fold3.com/browse.php#268|. This is a fee based subscription site owned by ancestry.com if you wish to research the individual soldiers who were part of any USCT unit.

UPDATE September 2014:
This beautiful flag is currently on display (but sadly only until 9/7/14) at the National Museum of American History.