The Trouble with Velcro TM - Is there an alternative?

Since the 1970s, large textiles have been hung using hook-and-loop fasteners, also known as Velcro TM,  which was an improvement for hanging textiles from rings, loops or tacks along the upper edge. Each of these methods created small areas of stress along the upper edge and often a 'scalloped' look. The technique has little changed from the first instructional handouts produced by the Textile Museum and the Smithsonian Institution. The looped side of the hook-and-loop fastener is machine stitched to a fabric, typically wide twill tape. The fabric is then hand-stitched to the reverse side of the upper edge of a textile; the hooked side is attached to the wall or cleat. 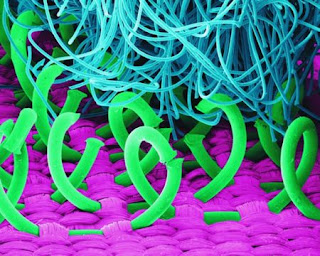 Over the years disadvantages of Velcro have come to light. Concern with its use began in the 1990s when discoloration of the product was noticed. Several conservators became concerned and were suspicious of product alterations resulting in color change and hook breakage, especially after the patent expired in 1978, resulting in various other brands of hook-and-loop fasteners coming on the market. Even so, Velcro and other hook-and-loop fasteners are still used today. However, it needs to be evaluated and possibly replaced every twenty years or so.

Velcro was invented in 1941 by George de Mestal, a Swiss engineer whose patent expired in 1978. With the patent's expiration the precise formulation of the previously known 'Velcro' could no longer be confirmed. Velcro of varying qualities and durability started to proliferate. Research by Kim Leath and Mary Brooks found that in 1998, two companies held the Velcro trademark despite producing notably different products.

An alternative hanging system is the Mag-Slat from SmallCorp, Inc.  A sleeve made of twill tape or Tyvek is made by machine-stitch to receive the steel powder-coated strip. To read more read this link.
Of course, more about the use of magnets can be found in Magnetic Mounting Systems for Museums and  Cultural Institutions, 2019. Get your copy now!
Joy Gardiner and Joseph Webber. " Failure to Bind: A Re-examination of the Aging of Hook and Loop Fasteners." Textile Specialty Group Postprints. Vol. 20, 2010. pp. 155-120.
Kim Leath and Mary Brooks. "Velcro TM and Other Hook and Loop Fasteners: A Preliminary Study of their Stability and Ageing [sic] Characteristics." Textile Conservation Newsletter. Spring 1998 . pp. 5-11.
Posted by Inside the conservator's studio at 3:34 PM

Email ThisBlogThis!Share to TwitterShare to FacebookShare to Pinterest
Labels: Exhibition, Use of Magnets in museums, Velcro