Preserving a Piece of Alaska History 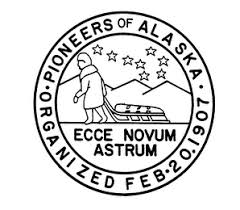 The Pioneers of Alaska is a fraternal organization originally founded in Nome, Alaska, in 1907 to preserve the legacies of all the state's early white settlers, collecting material related to Alaska's history, and promoting "the best interests" of the state. The organization also provides mutual aid, which was a critical safety net in territorial days and early statehood when there was a lack of reliable public or government services. Alaska was home to several similar organizations, but now only the Pioneers remain.

The Pioneers of Alaska was, and still is, an organization formed from the need of helping each other survive. Helping by providing food, care, medical, legal assistance, recreational opportunities, and social interaction was vital for life in this new and sometimes extremely harsh environment. Conditions of life in this rugged frontier made mutual associations necessary. This northern spirit lives on and is the base for the Pioneers of Alaska.[1]

Originally restricted to white males who entered Alaska before 1900, the organization's membership today must be residents of Alaska for at least 20 years to be eligible to join. Once led by men, women became eligible for all leadership positions in 2012. The Pioneers are divided into 16 igloos, or chapters, each for men and women. The Grand Igloo unites Alaska’s Pioneers by meeting once each year with the subordinate Igloos which take turns hosting these conventions. The subordinate igloos maintain active schedules of business meetings and social gatherings. The Pioneers, long involved in legislating fish and game laws and garnering support for the elderly, also played a key role in bringing Alaska into statehood.

The painted fabric banner receiving treatment in the Conservator's Studio was one created for Igloo III, located in St. Michael, a small community near Nome. The St. Michael Igloo was chartered on May 10, 1907. Today, St. Michael's population is less than 500 residents.

Tears in the fabric, paint loss, and a missing tassel were attended to by conservator Gwen Spicer.

The recent banner from the pioneers treated was an unusually constructed vernacular design with four satin weave fabric panels, two dark blue, and two white. These panels were positioned with the selvage edges horizontal, allowing for the stronger weft threads to carry the weight, but also creating vertical tears. 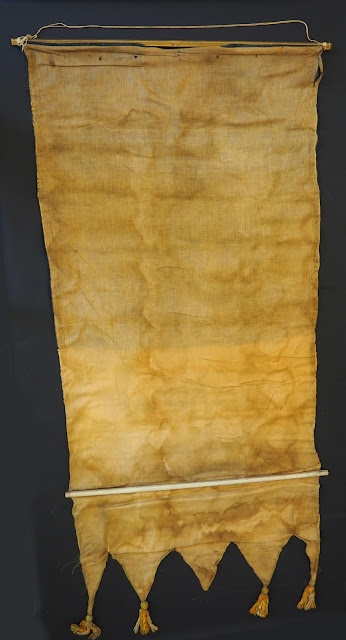 The reverse side of the banner, a cotton layer, shows extensive water damage.


The layers of the banner were separated to gain access to the reverse sides of the fabric. This also allowed for each side to be cleaned. Then the loose threads were aligned and supported with a full adhesive backing. By having the banner and its layers hanging vertically, the best alignment of the layers could be ensured. 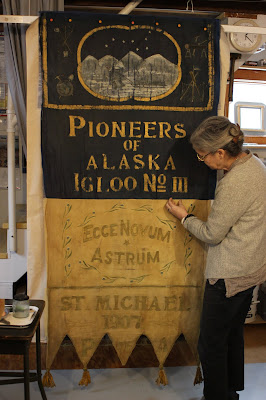 Gwen stitches the banner to a new fabric backing

The banner above is not the first banner of this type to be treated in our studio. Previously a banner a more traditionally made banner from 1909 for the Fairbanks Igloo was treated.

"Behold the New Stars: Pioneers Crown New Royalty." https://www.juneauempire.com/news/behold-the-new-stars-pioneers-crown-new-royalty/. May 14, 2018. Accessed April 10, 2020.
Posted by Inside the conservator's studio at 11:21 AM