A Safe Ride for the Sloop Clearwater Model

Last year, Spicer Art Conservation was asked to protect the model of the Sloop Clearwater for transportation from its home to New York City. The Sloop Clearwater is the floating icon for the successful citizen-driven environmental effort to clean up the Hudson River. The sloop is one of the first vessels in the U.S. to conduct science-based environmental education aboard a sailing ship.


Here's a bit of its history:


In 1966, folk music legend and environmental activist Pete Seeger, in despair over the pollution of his beloved Hudson River, announced plans to “build a boat to save the river.” Seeger, along with many other concerned individuals, believed that a majestic replica of the sloops that sailed the Hudson in the 18th and 19th centuries would bring people to the river where they could experience its beauty and be moved to preserve it.

Seeger and friends played dockside concerts up and down the river, passing the banjo case for donations to raise funds to build the sloop. As an awareness of Seeger’s vision grew, so did the crowds. In 1969, the 106-foot sloop Clearwater was launched at Harvey Gamage shipyard in South Bristol, Maine. On her maiden voyage she sailed to South Street Seaport in New York City, and then ultimately made her home on the Hudson River.[1]

The model was made sometime in the 1970s, by Bernhard Schulze, who created the hull, and Anneliese Schulze, who made the riggings with great attention to detail. 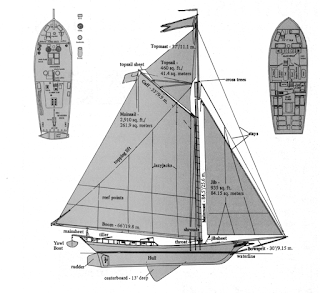 
The model was in quite good condition and was well secured to a solid wooden base. The model's hull extended beyond the base. Due to the many fragile elements, it was the base that required full support by way of a slide-out tray.