A Family Quilt Reveals its Layers

One can say that every object tells a story. Often more than one.

In the case of a family quilt that recently arrived in the conservator's studio, it came with two distinct stories....and perhaps more.

When we think of quilts, we tend to conjure up colorful designs of pieced or appliqued fabric sewn together and layered with batting and a woven fabric backing meant to keep someone warm on a cold winter's night. For centuries, quilts were ubiquitous domestic textiles, made and used primarily for bedding, and found in many cultures around the globe. Today, quilts are often created as art pieces meant solely for display.

While quilts were often made of fabric scraps, the composition of colors and pieces, along with the sophistication of the stitching, could reveal the artistic eye and sewing prowess of the maker. As with most textiles, the materials used and their assembly also reveal the socio-economic status of the maker or owner.

The quilt's importance in the household meant they also took on prized, often commemorative, roles. They were made and given to honor births, marriages, and moves away from close-knit communities. Some traditions required that a new bride have a number of completed quilts in her dowry, thus ensuring her household could be set up quickly.

The quilt in question clearly seemed to be a commemorative piece -- at least its most recent use, that is. The top of the quilt consists of seven rows of neatly composed diamonds, each pieced with printed cottons in complementary colors of pinks, browns, and blues. At the center of each diamond was a white patch containing the autograph of a female family member written in iron gall ink. This quilt style is known as a signature or album quilt. Made in honor of the family's matriarch, its owner said the quilt dated from c1860. The date also connects with the colored prints that were popular at the time.


In her Clues in the Needlework newsletter, quilt historian Barbara Brackman wrote, "Many of the blocks in the early album quilts made between 1840 and 1860 featured elaborate ink signatures and small drawings and verses. By the time of the Civil War, album quilt inscriptions had become shorter and were more likely to include only the block maker's name, and perhaps his or her hometown or date."

Turn the quilt over and a different story emerges. It is what appears to be a strip quilt. The back panel is made up of 13 faded and worn fabric strips of alternating toile patterns: a red/pink fabric with peacock feathers in the design and a blue and white fabric with imagery related to the Freemasons.

The Masonic images were adapted from late 18th century prints created by French-born artist P. Lambert de Linto. Masonic symbols do appear on quilts. Hilary Anderson Stelling, Director of Collections and Exhibitions at the Scottish Rite Museum and Library in Lexington, MA, tells us her hunch is that Masonic-themed textiles would have been used in homes, not lodges. Just as this reverse side suggests.

Textiles incorporating Masonic symbols, both home-made and commercially manufactured, have served many functions since the 1700s. They have transmitted family memories and history, becoming cherished heirlooms. They signified family identification with Freemasonry. Creating these objects offered an opportunity for the maker to display their skills. These textiles also functioned as educational tools - teaching family members about Masonic symbols and reminding Masons of the lessons they learned in the lodge. Like the quilts used to fundraise for political or social causes, Masonic quilts and textiles were - and still are - used to raise money for Masonic projects and charities.[1]

Below are two examples of prints by P. Lambert de Lino dating from the 1770-1790s with the corresponding similar images found in the quilt. 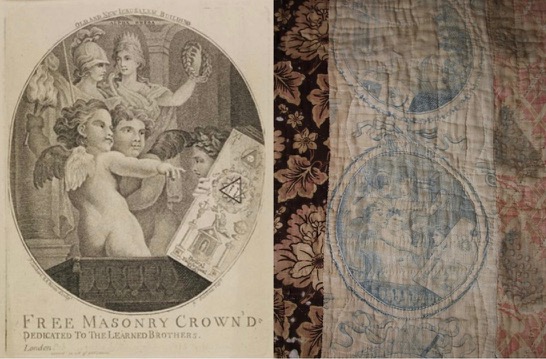 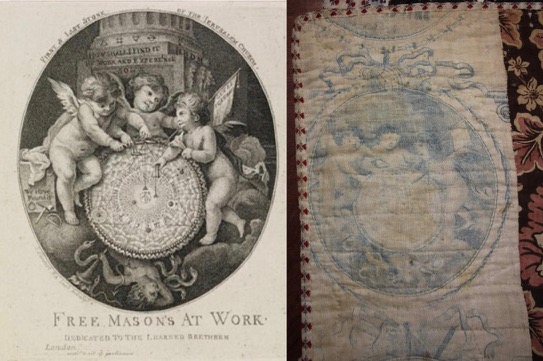 Also on the reverse is a large patched area near the center made of brown fabric with blue and white leaves, distinctly different from the fabric elsewhere. Obviously, this was a quilt worth saving. Did it belong originally to the family's matriarch? Did her descendants decide to honor her by keeping her quilt and adding a new top containing autographed squares? We know fabric was repurposed for quilt patterns; were whole quilts refashioned or updated, as well?

Posted by Inside the conservator's studio at 1:15 PM