Adinkra Cloth, Another Textile from Ghana

The kente cloth is a well-known woven textile from Ghana, stamped meaningful proverb symbols, and strongly associated with the Ashanti. Lesser known, but as important to the Ghanaians, is the Adinkra cloth.

Adinkra cloth is a woven, solid-colored fabric that is stamped with a wide variety of symbols. I recently had the great opportunity to visit a center in Ntonso where it was being made. Ntonso, located 20 km northeast of Kumasi, is now the center of adinkra manufacturing. This cloth, like the kente, is also typically worn by men in the form of a toga. However, its use is reserved for more sober occasions, like funerals, where kente is used for celebrations.

The origin of the adinkra dyeing technique is not fully known. Possibly it was adopted by the Ashanti around 1818, when King Osei Bonsu defeated the Gyaman (now in the Ivory Coast), whose chief at the time was called Nana Kofi Adinkra.

An early adinkra cloth is located at the British Museum, collected in 1817 by Thomas Edward Bowdich in Kumasi, the capital of the Ashanti Empire. This shows that the tradition was well established by Ashanti culture. 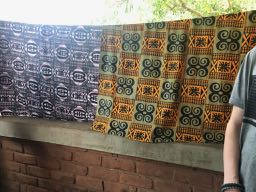 The pigment used in stamping the designs on the cloth comes from the bark of the Badie tree (Bridelia migrant). Once broken up, the bark is soaked in water.


Then the bark is pounded to break it up with a large mortar and pestle. 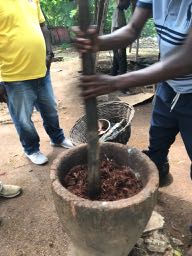 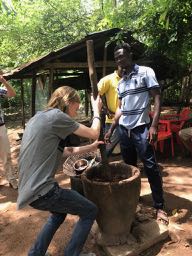 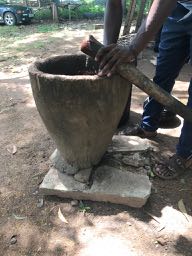 Then it is soaked again. Before cooking begins, it is filtered through a sieve. Interestingly, after eight hours of cooking, the liquid can be used as an herbal medicine. But for the ink, more cooking is required, usually lasting 12 hours.


The stamps, the most important part of the adinkra cloth, are carved from sections of a calabash gourd. More than 60 different Adinkra symbols are used, each of them signifying a specific tradition or proverbs.

Wikpedia, Adrinkra Symbols
Posted by Inside the conservator's studio at 12:02 PM