What are Flexible Magnets?

You know them and we bet you even own a few! We're talking about flexible magnets, also sometimes called refrigerator magnets, which first appeared as a type of ceramic magnet in the 1960's.

Because they're made with flexible resins and binders (synthetic or natural rubber) this type of magnet can be produced as 1) extruded magnetic profiles that are usually coiled or 2) in sheets, resulting in a wide variety of options and properties. For example, extruded flexible magnets are often found on shower door or refrigerator closures. Magnetic sheets, on the other hand, can be cut into all sorts of shapes and sizes, and are what you find holding that souvenir of your summer vacation to your refrigerator door or office filing cabinet. 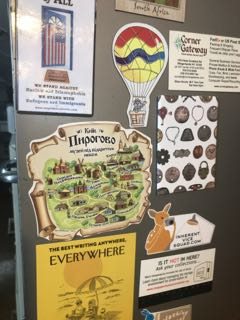 When flexible magnets are extruded, they pass through a line of powerful cylindrical permanent magnets or a rotating magnetic field. This step allows for the creation of a wide variety of options. For instance, they can be formed to have holding power on both sides, or only on one side.

The most commonly arranged magnetic poles occur in an alternating line format on the same surface plane (NSNSN or SNSNS). An interesting phenomenon occurs when two layers are slipped slightly on top of one another: they both repel and attract as one slides across the surface of the other. One side of the flat surface is more magnetic (has an increase in holding force) than the other. This arrangement of polar direction is called the Halbach Array. It is this alternating polarity that creates modest attraction (fig. 1).


The most common style used in museums is the multi-pole on one side. In museums, flexible magnets are commonly used to attach accession or object numbers in documentation photography, for overall humidification as a substitute for weights, holding wrapper enclosures closed, and mounting of lightweight flat artifacts. Their continuous magnetic field is ideal for overall support; their low pull force, however, does not allow them to support heavy or thick items (Schlefer, 1986; Stenstrom, 1994; Braun, 2001; Keynan et al., 2007; Vilankulu, 2008; Heer et al., 2012; Migdail, 2013).

Table: Thickness of the flexible magnet and the pounds per square inch of pull force

Flexible, bonded type magnets are conducive to creating large area pressure type systems. These ferrite-bonded magnets are weak, but to increase the strength, the polar directions are arranged as in a Halbach Array during manufacture. It is this alternating polar direction that provides gentle pressure, evenly dispersed over an entire surface. Conservators use the standard magnetic orientation of a magnetic force on one side. Sheets can vary in alignment when placed together and should be trimmed as a pair. Their strength can be increased somewhat by using both thicker flexible magnets and a related gauge of metal (Spicer, 2014). A second layer of flexible magnet placed on top does not add to the pull force of the first layer, due to its particular alternating polarity.

The addition of pressure created by the pull force can both introduce and assist in the removal of moisture during humidification of an artifact. An artifact sandwiched between absorbent materials is given overall pressure either between two flexible magnets or a top flexible magnet layer above and a steel plate below. The presence of the sandwiching method has been noted to slow drying time (Blaser and Peckham, 2006), but the benefit of not having to lift heavy weights offsets this.

Learn more about magnets and their many uses in the new publications Magnetic Mounting Systems for Museums and Cultural Institutions. Available for purchase at www.spicerart.com/magnetbook.

As a conservation tool, flexible magnets have been successfully used for a wide range of applications, including during humidification of paper and book repair as a substitute for weights (Brooks, 1984; Stenstrom, 1994; and Blaser and Peckham, 2006); an embellishment attachment with two layers of flexible sheets (Braun 2001); and mounting (Keynan et. al., 2007; Heer et al., 2012; and Migdail, 2012).

Posted by Inside the conservator's studio at 12:37 PM

Email ThisBlogThis!Share to TwitterShare to FacebookShare to Pinterest
Labels: conservation tools and equipment, Exhibition, Magnets, Use of Magnets in museums