Beep, Beep! Car in the Studio!!

One never knows what one might find in the conservator's studio. Last month it happened to be a car. Yes, that's right. And as you might guess, it wasn't just any car. What rolled into Spicer Art Conservation was a 1910 Stoddard-Dayton limousine.

First, let's take a short detour into the history of this remarkable brand. The Stoddard-Dayton was a high-quality car manufactured by the Dayton (OH) Motor Car Company between 1905 and 1913. Three models were available in 1906, with the limousine being the largest and most expensive (it retailed for $3,200). Within five years, the company was offering an astounding twenty models with four different engines. Quality engineering, materials and manufacturing set this company apart from the expanding field of automobile manufacturers of the early 20th century. While most of Stoddard-Dayton models received between 15-18 coats of paint, the limousines typically featured 30 coats of paint, each coat sanded and rubbed by hand. Known for their dependability, all models were extensively road tested before delivery to the proud owner.

Is it any wonder Frank Lloyd Wright owned a 1908 Stoddard-Dayton Model K roadster? 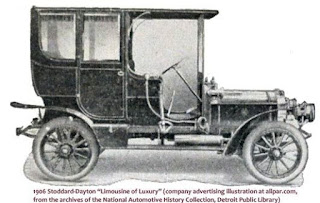 1906 Stoddard-Dayton "Limousine of Luxury,"
from the archives of the National Automotive History Collection, Detroit Public Library

When faced with financial difficulties, Stoddard-Dayton was acquired by the United States Motor Company in 1912, and later by the Chrysler Corporation. Wikipedia notes,


Stoddard-Dayton was slow to react to the emergence of a mass market and maintained a high-quality strategy after automobiles ceased to be exclusively rich men's status symbols. They were building cars as good as possible while Ford and General Motors were building as cheap as possible.

The Stoddard-Dayton limousine that made its way to the studio is indeed special. It was built on speculation by the company and, therefore, only one of its type exists. Privately owned, it has many of the traditional elements commonly found in the carriage of a horse-drawn vehicle: leather upholstery, often tufted; brass and nickel appointments, such as light fixtures; and fabric pockets, hand loops or 'swing holders', window open pulls or 'sash holders' and slides often made of ivory or bone. The photos below illustrate how the interior design of a horse-drawn sleigh on the right is echoed thirty years later in the limousine's interior on the left. Continuing this interior design tradition makes some sense, after all, how much change can a person take?

Communicating with the driver was important, whether with a speaking tube or bell at the end of a cord and tassel. The the case of this limousine, a speaking tube was available. The tube was covered in wool broadcloth to match the interior's burgundy broadcloth lining fabric.

The unusual aspect of this treatment is the amount of original textiles present that remain in good, but dirty and sooty condition. In addition, the owner was very interested in retaining as much of the original material as possible, while also wanting to be able to drive the car and accommodate passengers. It is a car, after all, that still runs.

All interior surfaces were cleaned by vacuuming and with dry soot sponges to remove residue, grime, and surface grease. Some textiles were also wet cleaned and dried. Deteriorated carpeting, window shades and tassels and the leather upholstery were all replaced as that they were too deteriorated for actual use.

Coach laces: Narrow woven fabric used to finish edges, corners and seams. It is both ornamental and functional. They are divided into types. Broad lace – Wider woven and used in door panels, falls, handholds, and cushion sides. Woven with elaborate patterns.  (Narrower ones with abbreviated designs in coordinating colors.) Seaming lace – A narrow fabric with one selvage used to cover cords. (It is similar to piping) Pasting lace – They function as a binding on borders and edges.  Narrower then Broad lace, typically ½” wide with a tape of the same width. Binding – has one tape side; used on falls, pockets and lining.

Sash Holder: A lace or leather strip fastened in the bottom of the window frame. The loose end is finished off with a piece of fringe or other ornament. It is used to raise or lower the window. Also called a “glass frame lifter” or “glass slide

Slides: Ivory, bone or metal fixtures attached to the top edge of the door lining upon which the lace or cord moves.  It is used to lift the window in the doors; flat bolts having a notch in the end used to keep carriage windows in their places.

Squabs: A quilted or stuffed section used on sides and back panels of an enclosed or partially enclosed carriage. Also called “upper quarter panel”.

Swing Holders: Straps are used to assist the passengers with getting in and out of a vehicle as well as a sling-like armrest.

Tapes: An extended plain-weave section that is woven at either only one or both sides of the decorative lace element. It is folded under, and used as a tacking edge.

Comparison images are from publications by the Long Island Museum, formerly the Museums of Stoney Brook. Their collection of carriages is superb.
Posted by Inside the conservator's studio at 10:09 AM