Before the age of air conditioning, a must-have accessory for comfort, fashion and flirtatious conversation was the ladies hand fan. In fact, the fan's history stretches back thousands of years to ancient Egypt, China and India, where fans were used in religious ceremonies, as symbols of royal power, for cooling oneself and for keeping away insects. The folding hand fan was a Japanese invention, but French fan-makers turned the craft into a high art form.

From around 1600, the hand-held fan was used in Europe, where it also gained the notion of a utensil for coquetry. Later on, fans were also used as commemorating special or historic events, such as weddings and coronations, the first hot air balloon flight of the De Montgolfière brothers in 1783 or for the French Revolution. Others were destined to entertain, such as the fortune-telling fan or those depicting mythological scenes.[1] 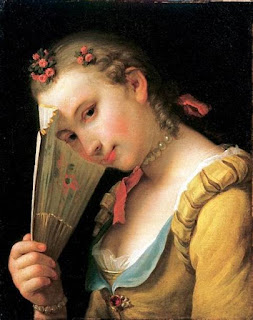 The fans we're most likely familiar with today are the folding, hand-held kind -- a ubiquitous part of most 18th and 19th century middle and upper-class women's wardrobes." A society lady in the 18th century was expected to know how to elegantly handle and hold a fan, allowing observers to differentiate between different social statuses."[2] Silk, lace, vellum or paper were adhered to sticks of wood, mother-of-pearl, tortoise shell or ivory and decorated with all manner of miniature paintings, cut paperwork, feathers, and paper festoons.


Regardless of what they are made of, most folding fans have the same basic parts. The piece that’s most visible to the eye, and the source of decorative expression for fan makers, is the leaf, which is creased so that it compacts into a little package within the fan’s monture, which includes the sticks, ribs, and outside guards. A pivot anchors the bottom of the fan, which is also known as the head, and that’s about it. Everything else is decoration.[3]

These accessories are much more fragile than they might first appear. The combination of hard or sharp materials such as bone, ivory and metals, combined with fragile textiles, feathers, and paper, make them especially vulnerable to damage. Fans decorated with feathers are very susceptible to insect damage. These fans need to be boxed and perhaps bagged independently. Opening and closing the fans may cause creases to split. In addition, fans, like hats, are prone to damage with repeated handling; care must be taken when wrapping and unwrapping them. Therefore, they are best left resting uncovered on a board with twill tape ties to prevent them from sliding. Of course material selection for the storage container is critical; ensure all materials are acid-free for the artifact's long-term preservation. 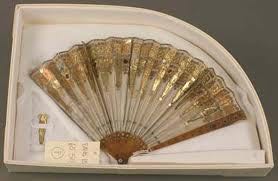 Email ThisBlogThis!Share to TwitterShare to FacebookShare to Pinterest
Labels: Storage