A Printed Pillow Sham and the Mexican Border Service of 1916

A client recently brought in a unique heirloom; a printed satin pillow sham with a portrait of a beautiful young woman wearing a sombrero and smoking a cigarette. Colored highlights of red, blue and yellow were painted into the design. Attached to the perimeter was an intricate and wide cotton fringe. Located on the lower proper right corner is "Mexican Border Service, 1916" painted in red. The construction of the pillow sham was quite simple, with one row of machine-stitching that secured all of the layers and the fringe together.

The silk satin had been folded while it was stored and this long-term folding had resulted in several vertical tears that were present across the woman's face.

As work began, we began to wonder about the message. What was going on at the Mexican border in 1916? With a bit of investigation, it became apparent that a hundred years ago, there was conflict at the border that included a dictator, southern migration for cheap labor, a revolution, an invasion of the United States by Pancho Villa, and the first taste of combat for a young U.S. Army lieutenant named George S. Patton.

This pillow sham was a souvenir for soldiers involved in the Mexican Expedition. In fact, pillow shams have been a popular item for soldier to send home during war or service. This is a more personal type of souvenir, one that was different from embroidered commemorative "trapunto" textiles brought back from the voyage of the "Great White Fleet" in World War I.


So why was there a conflict at the Mexican Border in 1916?  Several things were happening; and it starts with the Mexican Revolution.

Pancho Villa may be a familiar name if you know about the Mexican Revolution. Villa joined Francisco Madero's uprising against Mexican President Porfirio Diaz in 1909, and he later became leader of the Division del Norte cavalry, then governor of Chihuahua. According to Wikipedia, trouble between the United States and Pancho Villa had been growing since October of 1915, when the US government officially recognized Villa's rival and former ally Venustiano Carranza as head of Mexico's government. Moreover, the U.S. provided rail transportation through the U.S. from Texas to Arizona for the movement of over 5,000 of Carranza'a forces to fight Villa at the Battle of Aqua Prieta; where Villa's Division del Norte was smashed. Villa felt betrayed and began to attack U.S. nationals and their property.

Villa killed more than 30 Americans in a raid on the U.S.-Mexican border town of Columbus, New Mexico in March of 1916. In response, the U.S. government sent General John J. Pershing and his troops to enter Mexican sovereign territory and capture Villa (Pancho Villa Expedition, later named the Mexican Expedition). Pershing was unsuccessful and Villa proved elusive during an 11-month manhunt.


But it wasn't just the Revolution that was going on; in fact something larger was on the horizon. The U.S.-Mexico border was a potential location for a German-backed invasion by Mexico. The threat of such an invasion was discovered in January of 1917 when the British intercepted and deciphered the Zimmerman Telegram, discussing Germany's proposal to Mexico to form an alliance with Germany should the U.S. enter World War I. In March of 1917 the contents of the telegram were made public and affirmed by Zimmerman himself. The Mexican Expedition ended when the United States entered World War I (the U.S. declared war on Germany on April 6, 1917) and Pershing was recalled.

As an interesting side note, who happened to be serving under General Pershing? None other than a young lieutenant George S. Patton. There is a strange coincidence for us here at Spicer Art Conservation as we had recently conserved several items from the collection of the George S. Patton Museum of Leadership. We of course wondered, is there a pillow case among Patton's personal items from his service at the border?

We also discovered that a pillow sham is a common souvenir that was not only sent home to loved ones by service men, but it was also received by them as well. And, it is just as common today as it was one hundred years ago. 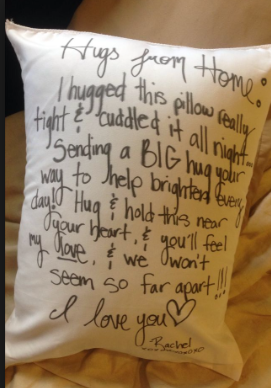 
Posted by Inside the conservator's studio at 11:45 AM