The conservation of 17th century needlework textiles, a conglomeration of stitches, symbolism and media

Mid-17th century English Stump Work embroideries feature a variety of symbolic images, with a variety of stitches, using a variety of materials. These pieces truly are are early "multi-media" pieces, and with their complex embroidery is a multitude of conservation needs. These 17th century pieces are rendered in a raised-work style, often referred to as "Stump Work". The images depicted in the needlework, the techniques and materials used, make these stump work embroideries all similar in appearance.

Recently in the studio was an embroidery called "Mordecai and Esther". It is named after the biblical story, yet the image is of Esther and King Ahaznerus of Persia. According to the story, Esther marries the King, and as his queen bravely implores his mercy to save her people from execution. 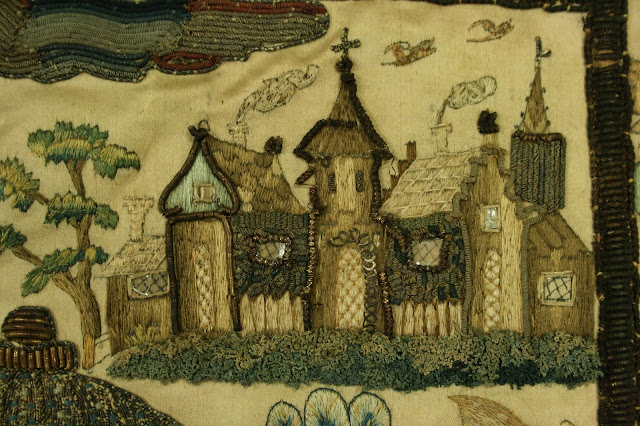 Biblical stories are found frequently in embroideries of this time, the story of Esther is quite common because it was accepted as "historical" because it was Old Testament, and therefore not seen as overly religious (so it would not offend). The following quote describes this type of work quite well:

"The variety of method was almost infinite, though the range of subjects was limited.  The curiously disassociated juxtaposition of "curiosities', mythological, religious, natural historical and even heraldic, in unrelated scales, combined in creating an atmosphere of magic or fantasy" - Lanto Synge in Antique Needlework 1982


These needlework textiles are heavily worked with symbolic images. (Much is written on the symbolism found in art, and especially symbolism in textiles such as tapestries). This work alone includes:


The multitude of stitching techniques and symbolic imagery is typical of needlework from the mid 1600's. In fact, as we looked at some other examples, the style and manner in which the pictures are stitched makes one biblical story was almost indistinguishable from another. Below is a needlework picture from the collection of The Metropolitan Museum of Art, the similar features are obvious. 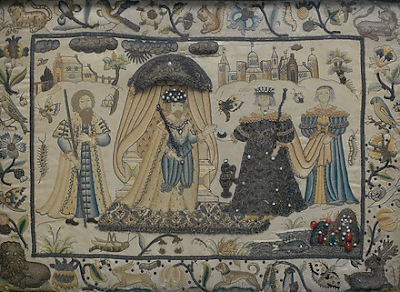 These multi-media needlework pictures require the conservation of a multitude of elements including:

-Silk ground, backed in linen, with backing of silk.

Closer inspection shows unique stitching techniques to create flat satin shiny areas, richly complex stitches creating 3-D images, and elements like pearls and sequins and chips of mica to create areas of interest and detail. Stitching techniques include (but are not limited to): tent stitch, gobelin, satin, french knot,  couching, rococo, detached buttonhole, etc. The satin stitch is easy to examine and clean in that the stitch is flat and easily seen. The knotted stitches and the dimensional work is much thicker and gives "nooks and crannies" for dirt to hide and mask unseen damage hidden below. 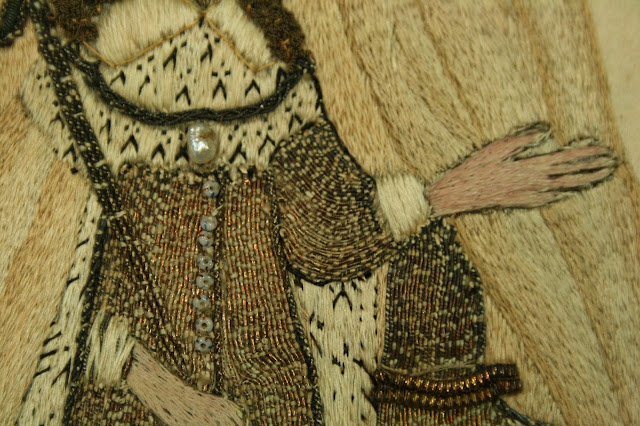 Regardless of condition, a 350+ year-old embroidery is a fragile textile and must be approached with regard to the age of the materials. This particular embroidery, while dirty and with some areas of loss,  is in good condition. As we always do, the treatment starts with a vacuuming using very low suction and a small brush attachment. When the silk and linen backings were removed, the embroidery showed evidence that it had been trimmed. This could indicate it was the lid or a panel of a larger object like a "casket" (not coffin, much like the one below).


The needlework we treated had been attached for a very long time to a wooden strainer and had been framed. It was removed from the strainer and placed on a mount constructed of DiBond that was cut to fit inside of the frame. A sealed package was created around the artifact that contained the the new DiBond backboard as well as new Plexiglas and spacers. The original wooden backing was returned, but only after it was separated from the sealed package with an interleaving layer of Marvelseal to protect the needlework from any other possible acid migration.

Some interesting work has been done by conservators using microscopy to look more closely at the complex threads used in these, and other 17th century embroideries, and how these threads were produced. Another interesting find is discussed at length on The National Gallery of Victoria's (Australia) website. While doing their microscopic evaluation they found evidence of peacock feathers used to embellish the bodies and feelers of insects depicted in the embroidery. Sadly, only these small pieces of evidence are left due to the quick degradation of feathers. Their website also includes x-radiography images of a needlepoint revealing hidden pieces of fabric and thread and how they were used.
_____________________________
Gwen Spicer is a textile conservator in private practice.  Spicer Art Conservation specializes in textile conservation, object conservation, and the conservation of works on paper.  Gwen's innovative treatment and mounting of flags and textiles is unrivaled.   To contact her, please visit her website.


Posted by Inside the conservator's studio at 1:46 PM