Fredonia Grange is the first grange in the United States and is therefore designated appropriately as Grange #1. But what is a grange?  Most people have heard of the term, but are not clear about what a grange is and what a rich history this group has.

The formal term is "The National Grange of the Patrons of Husbandry" and the group traces its birth to the time following the Civil War when the U.S. was feeling the economic damage from the war (particularly in the Southern states). But it was not just the ravaged farms and plantations in the south that were suffering, farmers everywhere were having troubles. Under the direction of Andrew Johnson a representative was sent to the south the survey the conditions. This man, Oliver Kelley was a northerner and not readily welcomed by southerners. But when Oliver Kelley revealed he was a Mason, fellow southern Masons spoke with him freely. From these conversations, Kelley felt that there was a way to revive agriculture and build the trust and cooperation among farmers, and Kelley knew that supplying food to the nation was dependent on this. Upon his return to Washington DC, Kelley and some fellow Masons decided that a secret organization (much like the Masons) for farmers and people living in rural areas could be a fraternal group that would promote cooperation and unite farmers everywhere, regardless of their Civil War affiliation. And so on April 12, 1868 with the establishment of Grange #1, the first farmers advocacy group was formed.


Fredonia Grange #1 was formed on April 12, 1868.  In 1915 their current building was constructed and this year they will celebrate the 100th anniversary of its completion. The grange has a long history, and one of their wonderful artifacts recently came to the studio at Spicer Art Conservation for some much needed treatment.


The curtain had hung from a wall for nearly 100 years and was quite dirty from years of cigarette smoke, a coal fired furnace and any other debris that had settled onto its surface. It had hung is a way which allowed for the surface to billow in spots, just like a curtain, and those areas were no longer lying flat, hence the painted image was not clearly readable in these areas. Additionally, testing showed the presence of oxi-cellulose in the cotton, and an area of white bloom was visible in areas of the paint. A large tide line at the bottom of the textile showed where it had been wet at some point.

The curtain required cleaning, stabilization and a sturdy method to display it, as the Grange was quite eager to put it back on their wall.

The curtain is made of 5 panels of fabric and is quite large, with an overall measurement 8 feet high, by 11.5 feet wide. The fabric is cotton and the image is painted in oil.  The image was created by a member of the grange who painted it specifically for the 1915 building (see the information plate below). 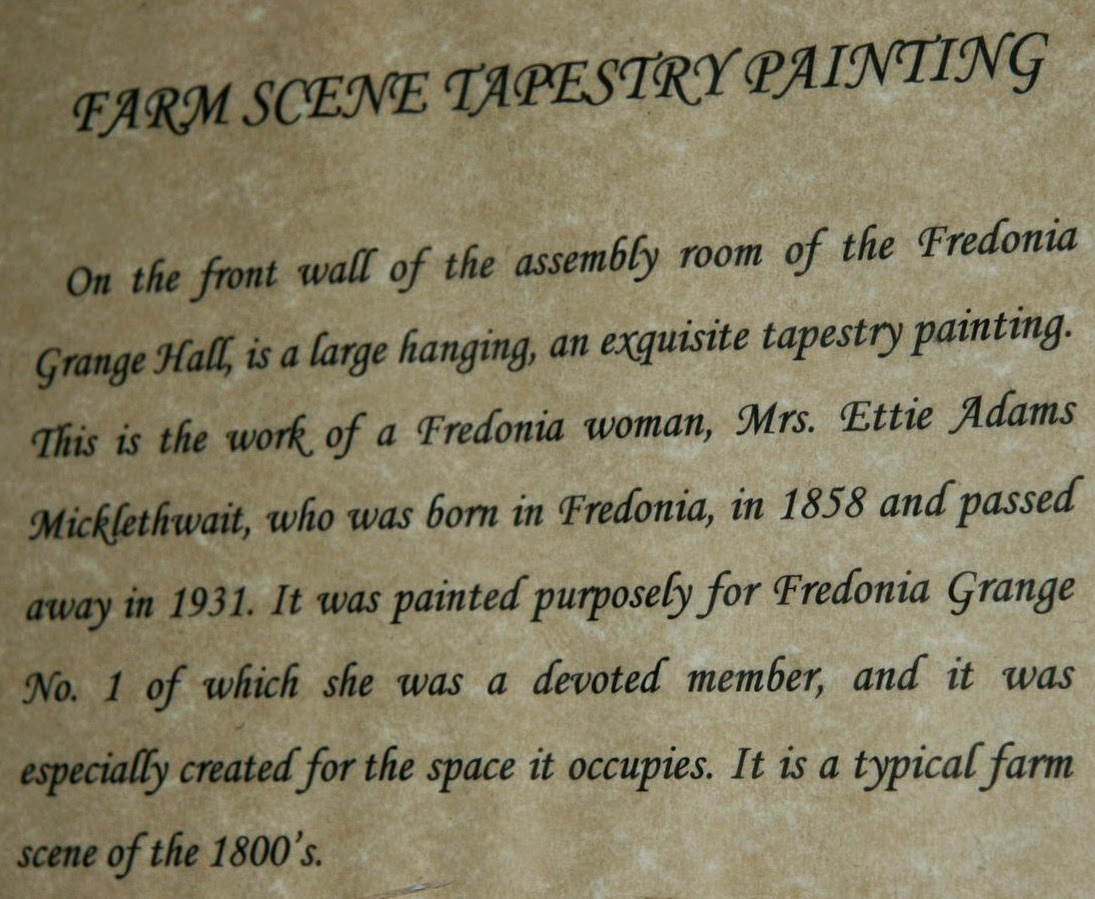 The Grange had this tapestry as a focal point in their main assembly room, and desired for it to be returned to the space for which it was created. They did not want to alter the way it had been displayed, other than to make the mounting system more efficient and the textile to hang evenly, without waves. A magnetic hanging system was devised for the textile (below). Note that the cotton webbing sleeve is affixed to the upper edge of the textile.


At Spicer Art Conservation, whenever an artifact has a magnetic system designed for its treatment, display or storage, we carefully document the system in a way that can be universally understood. This language for describing magnetic systems is helpful for anyone who will treat or care for the artifact in the future. The above mount was quite simple and is described as follows:

The mount description is in brackets and begins with the layer furthest from the artifact. The artifact is listed in italics and if any internal structure is placed within the artifact, it follows within the braces (aka {squiggly brackets}).

Here are some guidelines:

Learn more about magnets and their many uses in the new publications Magnetic Mounting Systems for Museums and Cultural Institutions. Available for purchase at www.spicerart.com/magnetbook.
Posted by Inside the conservator's studio at 2:41 PM