September 11th and a flag that survived.

What you may not know is that the New York State Museum in Albany is the largest repository of artifacts from the September 11, 2001 attack on the World Trade Center buildings in New York City. If you do know about it, and you've had a chance to visit, you have seen a poignant exhibit that covers the event, the response, and the recovery in a way which comprehensively tells the story of not just a single date, but the time that followed when artifacts were uncovered from a massive debris field. The exhibit tells the story of an event that none of us will ever forget.


One object found in the debris was a United States flag.  While not the only flag found, this flag was one which flew from a world trade center tower, although which tower is unknown.


Finding a flag in the debris is truly amazing. Picture an unending amount of twisted metal, dust, dirt, and unknowable objects. Now imagine coming across a flag like this (see image below), virtually intact and minimally soiled.  It must have been an incredible find for recovery workers.

The flag measured 7' 6" high and 11'6" in length. It had many scattered tears, the largest was 16"x5" located at the top white stripe. It had 40 mid-sized tears, and approximately 30 small tears. See the images below. 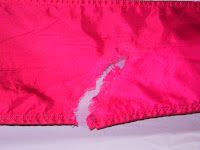 Unlike many flags that come through our doors, keeping the damage to this flag prominent and unaltered was the priority, yet equally important was making the intactness of the flag evident. How could a flag endure an explosion and a building falling on top of it? Imagine a thin nylon flag buried under tons of rubble, coming out of the dirt and debris with bright colors of red, white and blue, the flag damaged, but intact. The symbolism was not lost on rescue workers, and the effect was not to be lost on exhibit goers. Head Conservator, Gwen Spicer, knew this was an important juxtaposition. Her task was to conserve the flag, yet allow it to show all of its tattering along with its majestic color. The flag would be hung prominently at the center of NYS Museum's exhibit, so it would require a hanging system to allow it to flow freely, yet not create stress on the holes and tears it suffered that fateful day. 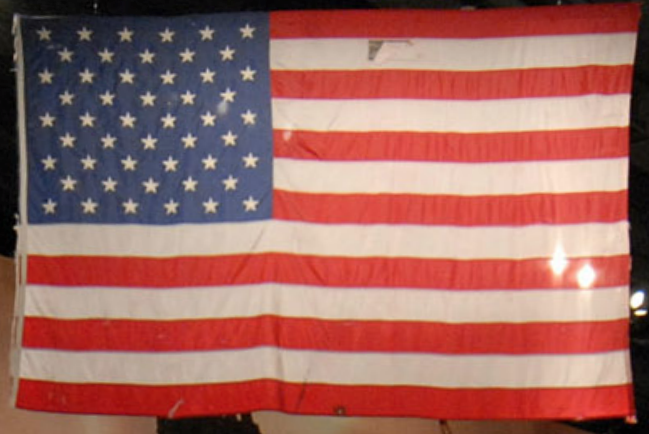 Twelve years has passed since that day in September, yet the objects and the memories of that day live on at the NYS Museum in their permanent collection and ongoing exhibit, visit it if you can.
If you are unable to visit this exhibit, the museum has made much of this information available on its website: http://www.nysm.nysed.gov/wtc/. Included are panoramic views of the exhibit space.

Posted by Inside the conservator's studio at 4:33 PM