The conservation of textiles belonging to Thomas Edison

It seems like in the last year, everywhere I have been looking, Thomas Edison has been appearing.  I recently visited the Schenectady (NY) Museum, now called miSci, and there he his. Really no surprise given his roll in the founding of General Electric, originally headquartered in Schenectady, New York. But then I watched a PBS program on Henry Ford and learned that he too had spent part of his early career working at the Edison Illuminating Co. and was a close friend of Edison. Then later, I found that Nikola Tesla himself worked for Edison as well, after arriving in the United States. 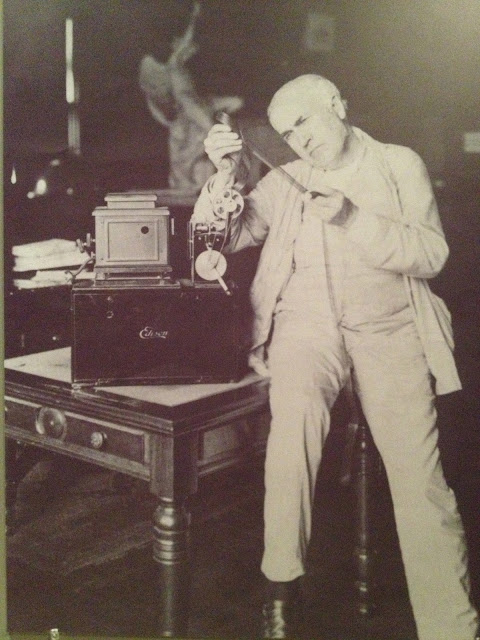 So why, do you ask, would this matter to me? And why so keen on Edison and his continuous legacy? And WHAT does this have to do with object or textile conservation?

It all started when miSci approached me to work on a curious piece they inherited from the GE Museum when it left Schenectady. The piece was a tinfoil from 1878 that was used to demonstrate Edison's phonograph. Discovering the history of this tinfoil, and then following it through to the revelation of the words actually captured on it was quite a journey.  To read more about this amazing treatment and the unbelievable outcome go here:
http://insidetheconservatorsstudio.blogspot.com/2012/04/0-false-18-pt-18-pt-0-0-false-false.html
then here for the second part of the story:
http://insidetheconservatorsstudio.blogspot.com/2012/08/update-edisons-tinfoil-can-sounds-on-it.html
and here to read the conclusion:
http://insidetheconservatorsstudio.blogspot.com/2012/10/edisons-tin-foil-lost-recording-now.html

The tinfoil was my first exposure to Edison.  Then, a short time after the conservation of the tinfoil made national news, I was contacted by a curator from a historic site who had in their collection several more Edison tinfoils needing treatment. And then, as if Edison was not prominently "on my radar", I received the contract to treat a few items at the Edison National Historic Site in West Orange, New Jersey. The items included: his laboratory coat, a United States Flag presented to him by Ediphone Distributors in 1920, and the projection screen from his library, believed to be the oldest projection screen in the world.  To read more about this treatment see the blog entry: http://insidetheconservatorsstudio.blogspot.com/2012/12/vacuum-vexations-and-victories.html

Even with all of this Edison exposure, and the opportunity to work on some of his very own items, and spending time in his workshop where he experimented and worked and thought and invented; I am still astounded at his life and accomplishments. Each time I read something about him I learn something new (for example, there is an asteroid named after him). And each time I am impressed and wonder how one person could accomplish so much?

The most recent Edison item I treated was his laboratory coat which he used in his Chemical Room.  This was the coat he wore during his later years and it was during this time he was spending considerable time experimenting with batteries. As you can imagine the coat is remarkable. It is covered with holes from acid and staining from a variety of substances, and it is beautiful. Beautiful because to me it really shows that Edison was clearly not afraid to get dirty as the coat appears to have barely saved his skin from his caustic experiments. There is not one square inch of clean fabric left on this coat, Edison used it heavily and it shows.

From the textile conservation standpoint, the coat is in an interesting condition in that it has seen treatments that date back many decades. (remember that Edison died in 1931, so the coat is roughly 100 years old).  As I look back at some of the patching that had been done, or the full lining to the coat with tight herringbone stitches, I think of the textile conservators who have gone before and how their treatment, at the time, was thought to be the best the "industry" had to offer. I wonder if they, like Edison in his work, knew that there was always a better way that just hadn't been figured out yet? I wonder what I am doing now that in 100 years will be looked at as an "interesting old way of textile conservation"?

Posted by Inside the conservator's studio at 11:00 AM