The conservation of Zouave uniforms

Much has been said about Col. Elmer Ellsworth, the first officer who achieved posthumous celebrity status after being killed in the Civil War. He is in fact considered by many to be the first fatality of the Civil War. Col. Ellsworth's uniform coat, which he wore when he was fatally shot is housed at the New York State Military Museum, and 152 years after his death, the uniform remains in good condition. But how does one conserve the coat of such an icon and ensure that it remains stable for years to come? It is a question many conservators grapple with when faced with treating a piece of history and making it stable, but not changing any part of that which makes it historically significant.

Elmer Ellsworth is perhaps the most notable New Yorker to serve in the Civil War. Born in Malta, Saratoga County, New York, he later moved to Illinois and joined a volunteer militia. It was in Chicago where Ellsworth met French military tactician Charles DeVilliers and was inspired to create his own private militia modeled after the French Zouave (pronounced "zoo-av") style that had been the standard style of the Crimean War. Ellsworth loved the Zouave style of brightly colored uniforms, pantaloons and silk sashes.

An important turn of events for Ellsworth is when he studied law in the offices of Abraham Lincoln. The two men became friends, and with the age difference he perhaps was felt to be more of a son or younger brother to Lincoln, but was held in great regard and affection by Lincoln.

Ellsworth supported Lincoln in his campaign for president and then later for troops to defend the Union.  His first attempt to recruit was in NYC, and was directed towards the fire companies. He organized the 11th New York Volunteer Infantry, known as the 1st New York Fire Zoauves, because they recruited from volunteer fire companies and wore uniforms designed to look like those of French North African Troops. These uniforms were in true Zouave style: flamboyant and unique.

Ellsworth's promising career came to an end on May 24, 1861 in Alexandria, Virginia. With a small party, including Corp. Francis Brownell of Troy, Colonel Ellsworth climbed to the roof and cut down the oversized Confederate flag flying defiantly over the Marshall House Hotel. The true events are sketchy, but the end result is that during their descent Ellsworth and his party encountered Jackson, the inn keeper, armed with a shotgun. Gunfire ensued, Jackson shot Ellsworth and Brownell avenged Ellsworth by stabbing Jackson, leaving both Jackson and the 24 year-old charismatic Ellsworth dead.


The coat below is what Ellsworth was wearing when he was shot. His death for many marks the opening of the Civil War and Ellsworth is made famous for his heroics and his sacrifice.  His story inspires the North, and he is an instant hero.


The remains of the large, 14 x 24 foot, Confederate flag, now known as
the Marshall Flag.  It is so large that it was easily seen from across the
river, in Washington, DC where it was considered a sign of aggression.


Following his death, Col. Ellsworth became cult-like in the eyes of the Union. Poems, songs, sermons and memorial envelopes lamented his loss, and parents named their babies after him, and streets and towns used his name.

As is clearly seen in the above image, Col. Ellsworth was shot in the chest. The bullet created a large hole that affected all of the layers in the front of his uniform. One of the brass buttons was also damaged. (His uniform is more conventional, then his Zouave designed uniforms of his troops. Only his pant legs had an extra stylish stripe.)

It is common in textile conservation for textiles to be supported with patching or lining. The added fabric adds strength to the weakened area. But in this case, the museum clearly did not want the hole to be patched. They wanted the area to still show the hole due to its historic significance, while also being stable. Smaller holes that have occurred due to time, insects, and/or perhaps less careful handling, were stabilized locally with patching. But the hole left from the gunshot was not patched, rather the surrounding edges of each layer were individually secured with stitches in order to prevent continued, or future fraying. Fabrics which are used for patching are a wide range of fabrics and weave structures, mostly selected to blend with the artifact. 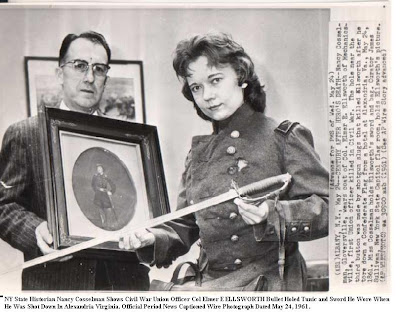 Handling of artifacts has changed greatly from above, where in 1961, a well-meaning historian models Ellsworth's jacket for a newspaper photographer. The uniform coat of Col. Ellsworth remains part of the collection of Civil War items in the New York State Military History Museum, along with most of the enormous Confederate flag that Ellsworth took down at the site. Following his White House funeral, Ellsworth’s body laid in state at City Hall in New York City and at the State Capitol in Albany, respectively, before being buried in Mechanicville. The Marshall House flag accompanied Ellsworth’s body home to New York state. Relics connected to Ellsworth’s death became prized possessions, including pieces cut, or “souvenired,” from the Marshall House flag (hence the condition of the flag in the above photograph). 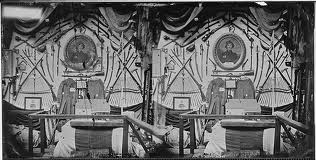 The image above is a bit grainy, (The image is a double image) This is a photograph from an exhibit of items associated with Ellsworth (c. 1865). The large stripped item in the front is most probably the Marshall Flag. Visible in the center is Ellsworth's uniform.


An unbelievable amount of information is available about Ellsworth. Some great places to visit are the websites for the Smithsonian as well as the NYS Military Museum.