The conservation of a McClellan Saddle, and a custom mount

Recently a Civil War era saddle came into the studio. A McClellan saddle, in fact.

Designed by George B McClellan (1826-1885) a career Army officer in the US Army. It remained in continuous use from 1859 to WWII, and is still in use by ceremonial mounted US Army units today.

There is some conflicting understanding of where the design originated, but many historians feel that it was based on the Spanish tree saddles, used in Mexico and in some parts of the US.  McClellan proposed the design after he spent one year with a military commission studying European tactics, weaponry and logistics.  Upon his return he produced a manual for the American cavalry, in this manual he proposed the design for his saddle.  Its importantance was that it was simple, less expensive to make than the current saddles of the times, it was lightweight so as not to further burden the horse, and well-made so the rider and gear were supported.  Simple meant less parts, which meant the saddle would be easier to fix in the field.  The light weight meant not only less for the horse to carry, but also easier on the horse so as not to cause saddle sores.

The original design had a rawhide-covered, open seat, leather skirt and wooden stirrups.  Our example is below.

Saddles are complex artifacts with a mixture of sturdy parts and attached, more vulnerable, elements. It is this mixture of elements that complicate their display and storage.  They are also very heavy and quite awkward to handle, really requiring more than one set of hands.

As artifacts, they seem sturdy and robust upon first inspection, but in reality saddles can be awkward and vulnerable to damage.  The saddles that SAC sees have some historic significance.  They were used in battle and they saw hard, extensive use.  Of these saddles, the leather is usually quite warn from their heavy use, and it is distorted and weakened with age. These leather elements, which are the weakest, are often also the elements that are the most vulnerable, yet are still responsible for supporting heavier elements like stirrups or buckles.  It is no surprise that these often need to be reinforced.

Over the years SAC has treated several saddles from a range of time periods and styles. The supports created for these saddles were based on a range of solutions directed by the institutions needs, and what could be adapted.

For this particular saddle (that is quite complete and includes a leather girth strap), a commercially produced  metal saddle stand was purchased and adapted to meet the needs of the museum.


The webbing was then covered with  polyester batting and cotton muslin. Polyethylene foam was secure below to widen the width of the stand slightly. A decorative saddle blanket could be placed under the saddle for display aesthetic and interpretation.

Storage of this type of collection is a challenge. I must confess that I am a storage junkie, and I love to see the way storage of objects like saddles is approached.  The difficult task is to accommodate not only their size, but shape and weight.  Below are a few solutions that I have seen in museums during my travels. I include them as ideas for others.  Especially those who might be tackling the storage of complex artifacts.

A simple solution is a fixed rod that is padded and supports the saddle with sufficient space below. The leather straps are relaxed as that the stirrups rest on the shelf below.


Another solution are the use of wall mounted supports with the saddles stacked on the wall. 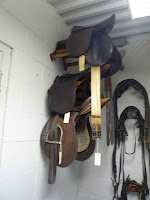 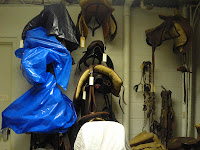 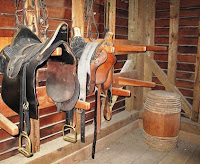 Notice however with some of the above storage/display, the saddle is supported, however the stirrups and girth (the "belt" that goes under the horse and attaches on both sides of the saddle) are often left to hang free, causing some form of stress on the straps or buckles.  The Smithsonian has a McClellan saddle at the National Museum of American History and the Museum of the Confederacy has one in their vaults.  These saddles are not currently on display.  I don't know about you, but I cannot help but wonder how they are being stored.

Interestingly, some McClellan saddles on display at various museums are "new in box".  How is this possible?  Apparently the McClellan's that were manufactured circa 1904 were over ordered, this resulting in several that remained in storage in Army warehouses completely unused.

Posted by Inside the conservator's studio at 9:02 AM