I have known Wilderstein for many years now, mostly as a pleasantly preserved home of a woman, who happened to give a scottie dog to a former president.  Over the years it has gone through some drastic changes, like a coat of paint (it hadn't been painted since 1910), or a new roof that is actually water proof.  These improvements have all occurred under the loving attention of several devoted people, but especially Duane and Linda Watson, who are just two of the dedicated volunteers who keep Wilderstein going. 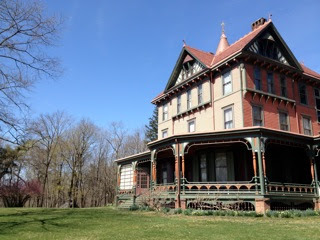 This house is not just another estate that over looks the Hudson River, but behind the once weathered clapp boards is an interior that was attentively detailed by some of this country's most important fashion decorators of the later nineteenth century. 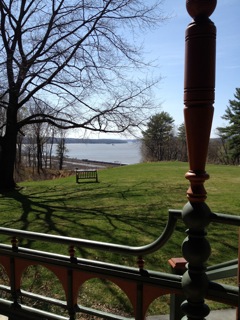 Ms. Suckley's (pronounced "sooklee") family spared no expense when building and selecting how their home was to be decorated, and of course only the best artisans of the time were contracted.

Spicer Art Conservation has been helping Wilderstein for several years with bringing the fragile and dirty wall coverings of the home back to their former glory. The first room was the dining room, which due to water leaks was in great need of conservation. Then later the front parlor.


The two rooms feature original panels of weft-face woven fabric which covered the walls.  The parlor has 10 fabric panels made from silk and cotton.  The dining room has 15 panels of wool, silk and cotton or linen fabric.  In each room the panels were quite fragile and showed varying degrees of fading with layers of soiling and soot deposits as well as signs of general deterioration.  A note to this is, these panels were placed on the walls nearly 125 years earlier and for that kind of lifespan, the deterioration actually could have been much worse.  Perhaps that is a testament to using such incredibly well made fabric.  For the first generation Suckley's, it appears to be money well spent.

The dining room had suffered the most damage.  The floral print fabric was dirty, but had also been affected by webbing cloth moths, who had left their casings

behind.  The room had also suffered water damage from a long term leak.  This room also had many decorative features: wainscoting, intricate wood work, embossed and painted plaster, each which contributed to the detailed cleaning that would need to be done.  See the photo below: the left side shows the condition of the room prior to beginning the treatment, and the right shows the area that had, up to that point, already been cleaned.


The parlor, which could be referred to as a gold-colored room revealed some surprises about the true original color, which was (as you may have guessed) not gold.  The images below reveal small hidden sections of the fabric.  The closeup below is of the fabric hidden behind the gimp (aka the edging trim). Here you can see cream, mauve, pink and some blues.  When you view the ceiling in this room (see photo immediately above), the color of the hidden fabric "makes sense". 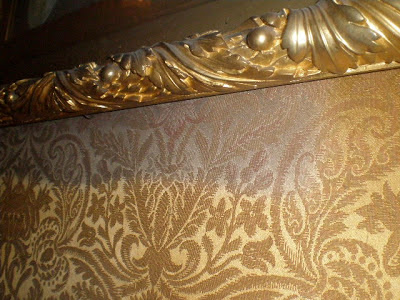 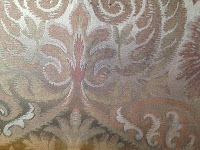 While still very faded, glimpses of the original colors in the wall covering fabric is evident where a frame once covered this section of wall (see images left and below). 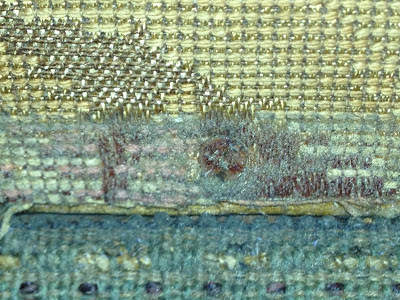 The Suckley house has unique issue which contributed to the condition of the wall  coverings.  Any house built before gas and oil fired furnaces, used coal.  The coal dust went everywhere and attached to  everything.  You see, it is the oily nature of the coal dust which allows it to adhere especially well to all types of surfaces, but especially textiles.  It is a gradual build up that is not noticeable at first, but after years of buildup, it becomes impossible to miss.  To add to the issue, the coal dust can also be trapped in duct work.  Which means long after a system has been transferred or changed to another fuel source, the oily coal dust is still being sent throughout the house (this would be especially damaging if the system was switched to forced air heat).

True, historic homes dot the landscape all across the Hudson Valley.  And until recently, Wilderstein was just one of those many homes.  However, Wilderstein got a recognition boost recently with the awareness of it's former owner and her relationship to FDR in the movie, "Hyde Park on Hudson" where the relationship between Ms. Suckley and President Roosevelt was fictionalized.  Nonetheless, spending time at Wilderstein, getting to "know" the house, and knowing how important it was to Daisy Suckley, it was so wonderful to see Ms. Suckley "come to life" in this film, as I never had the privilege to meet her.

If you would more information about Wilderstein, visit their website here:  www.wilderstein.org.  If you would like to read more about Wilderstein, check out the story written about Daisy Suckley in the New York Times here: http://tmagazine.blogs.nytimes.com/2012/12/19/ghosts-of-the-hudson-valley/ .  And if you have the chance to get to Wilderstein when it opens in the Spring, I recommend it highly.