Conserving and then displaying large textiles in a limited space

What does one do when they want to display a large textile but have no space?  This is a dilemma that many face, whether it is one large artifact or a group of artifacts.  Conservators will always suggest that an artifact be fully supported.  However, full support can be tricky, particularly when space is a premium in many museums and especially historic sites.  Historic sites were not designed to display artifacts, and flag display can be especially problematic.  Flags are often large, and some flags can be gigantic (for example, garrison flags that can be as large as  20 or 30 feet in any one direction, and so called "mammoth flags" whose hoist edge exceeds 50 feet).  But coverlets or quilts might also be considered large.  Think of the "Aids Quilt" that is literally endless in size.

Many times, mammoth flags are displayed outdoors, over long periods of time, and their sheer weight causes incredible weakness and so tearing is inevitable.  To add to the demise of these huge flags is the storage of such an object.  They are enormous, they weigh a ton, and they beg the question: where could you put me?  The Utah Statehood Flag of 1896 comes to mind (see below) when pondering these obstacles.  That flag measured 74 x 132 feet and was displayed during various occasions from 1896 to 1903.  When hung, it eventually tore under it's own weight, and when stored was in damp locations (the basement or greenhouse) causing it to mold.  The flag was respectfully destroyed, but had it not been, where would it be today?  It's sheer size, coupled with the weight (smaller mammoth flags weigh in excess of 500 pounds!), and its increasing fragility would make it a display nightmare for any museum.  Showing a portion of these flags could be the answer, but how would you support the not-shown portion?  While patches were cut from some of history's giant flags, it appears no one cut a souvenir from the Utah flag.


Of the great flags in history that were "super-sized", only a few have survived, and the display of these flags is space consuming.  The Star Spangled Banner (see image at right) comes to mind.  The flag hung vertically for years before it became so fragile it required substantial conservation, including a complete change to the way it was displayed.  This particular flag is unique in that it has iconic status and the Smithsonian has ample room to house the 30 x 42 foot flag at a 10 degree angle in a temperature and humidity controlled custom made display room.  But for the average historical society, housing and displaying large artifacts is simply not possible.

Some historic sites have developed ingenious ways to display their flags.  The Pike County Historical Society in Milford, Pennsylvania has mounted their large National flag, the "Lincoln Flag" with two large rollers that displays the flag like a large scroll with the full height of the flag exposed (see image below left).  The smaller area of exposure is displayed in a deep frame with glazing. Only the most important feature of a narrow section of the flag is actually seen.

At the Old Dutch Church in Kingston, New York, they have a group of four Civil War flags from one Regiment.  These silk flags had been on display for many years in a wall cavity (see image below).  They approached SAC about their conservation and preservation.  Their small museum was up on the second floor, accessed by a long winding route.  It was not possible to display the flags there, even if they could be safely transported.


The solution was to encapsulate the flag between sheer Stabilitex.  The stable flag was then wrapped around a three-dimensional mount that was sized to fit inside the cavity in the orientation of its original mounting.  Now the flag is fully supported, historically interpreted, and perhaps better seen by the viewer (see images below).  The other three flags were humidified and rolled for storage.


Neither of these two flag examples are displayed with conventional methods, however, they balance the support and preservation of the flags, while also allowing the visitors to view them.  In either of these cases, if they were displayed conventionally, this would not have been possible due to space limitations. 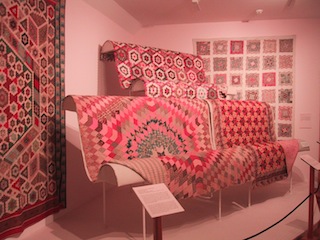 Other large artifacts are quilts and coverlets.  To the left and below are a few images of such an exhibition at the Shelburn Museum in Shelburn, Vermont a few years ago, where they successfully balanced preservation and visitor enjoyment of their vast textile collection. 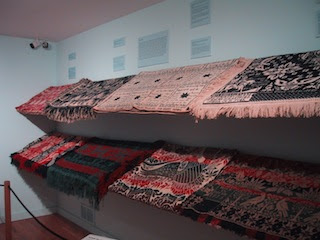 -More on the Star Spangled Banner and the painstaking conservation efforts taken by the Smithsonian can be found at http://amhistory.si.edu/starspangledbanner/default.aspx
-More on Large Flags, especially an article about the mammoth Utah State Flag written by John Hartvigsen, can be found in the most recent edition of Raven: a Journal of Vexillology, Volume 19.
also check out NAVA's website at www.nava.org
-More on the Old Dutch Church project can be read in an article "'Mounts Altered; Mounting Textiles to Meet the Needs of Clients" presented at AIC's annual meeting.
_____________________________