My Visit to Thurber's Home

Earlier this fall I was visiting Columbus, Ohio, when I visited the Thurber Home. For those who do not know James Thurber is was a contributing humorist for the New Yorker in the 1920s and 1930s. He is famous for his short stories, such as the incomparable "The night the bed fell". "The secret life of Walter Mitty" has been a staple of anthologies for decades. His dog cartoons and illustrated poems that first appeared in the New Yorker are justly famous. Much of his work is readily available in the The Thurber Carnival, also adapted for Broadway. 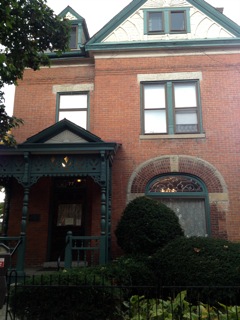 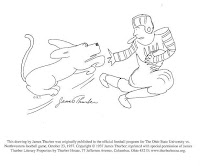 Two floors can be visited. It is a self-guided tour of the two floors. The visitor is given a brochure upon arrival; each room  has a storyboard. Cartoons and quotes form My Life and Hard Times, are used throughout the house and interspersed with the self-guided tour.

The first floor is furnished as it might have been during the years that the Thurbers lived there. In the second floor, two of the bedrooms are devoted to exhibition spaces. The other rooms on the second floor are offices, but no one seems to mind the presence of visitors. The third floor has been turned into a residence for a visiting writer.
The wallpaper was researched and was reproduced based on recollections of Thurber's younger brother, who was still alive when the house was purchased. He recalled which layer of paper was present when they lived there. As a rental property, many layers of paper were  found, none having been removed over the years.

Due to his eye injury, Thurber was unable to complete a compulsory ROTC course, so OSU would not let him graduate. Later they did give him an honorary degree.
One of the intriguing aspects of the museum is that it is not just an historic house where a great and important figure lived. The house has been turned into a living embodiment of writing, humor and education. One can walk into the home and imagine an earlier time, but that also workshops and writing events are also happening on-site and in schools.
There are no "do not touch" signs here; rather visitors and program groups are asked to interact with the space. In fact their mission is Thurber House: Where laughter, learning and literature meet. Does that not just make you want to be a part?

Email ThisBlogThis!Share to TwitterShare to FacebookShare to Pinterest
Labels: Historic Interior, Museums we have visited