Conserving a textile lantern from The Wide-Awakes

In this political season, why not think about an earlier campaign?  Imagine you are watching a nighttime parade, full of young men, wearing black oil cloth capes and hats, and carrying lanterns.  It would be the year 1860, just before the election of Lincoln and Hamlin.  You would be watching the Wide-Awake supporters, a group who wanted to ensure that slavery did not spread to the Western Territories, a sentiment felt by all Republicans of the day. The Wide-Awakes were a political group that began in Hartford, Connecticut and quickly spread over the north, spreading as far west as St. Louis, Missouri. 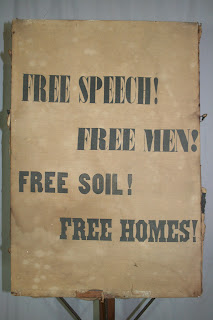 A large eye emblazoned on their standard attested to their watchfulness over the nation. The group had mottoes like "free soil and free men".  Reports say that these large parades had many oil light torches, but now there are only a few left in existance.
The Columbia County Historical Society is lucky to have one of these.  It is now in their exhibition, Civil War Panorama: Columbia County 1860-1865, open till December 2012. 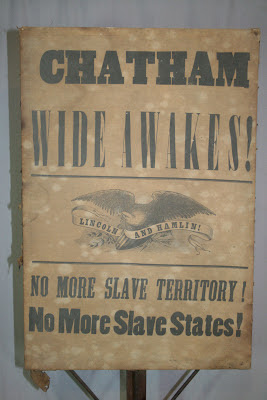 The torch banner was quite soiled, but was quite complete for being such an awkwardly shaped artifact.  It was constructed of a wooden box frame that was covered with printed cotton fabric stretched on two sides, the front and back. The sides had been covered with fabric as well, but are now mostly lost.  The top had been kept open.  The box is attached to a tall pole.  Forge iron brackets helped to support the two together.
CCHS's torch banner does not have the open eye symbol, but it is printed with Chatham, a mid-size town in the county as well as the phrases "Free soil and free men," with added "Free speech and free homes." In some ways, this torch banner is quite explicit with the issues of the group.  Spattered lighter-colored spots were evident from the oil.

The curator and newly appointed Director, Diane Shewchuk, wanted the artifact preserved, yet, still able to maintain its transparency of light.  Additionally, the cotton fabric needed extra support from its many years of being exposed, yet, often, backings or other supports are opaque.

When the torch banner arrived at SAC's studio, it was cleaned throughly. The original cotton fabric layers were reinforced with a sheer fabric that was stretched onto wooden frames that were custom fit inside the wooden armature.  The new fabric was to provide the original cotton with added support and lessen potential bowing.

Once the treatment was complete, we attempted to figure out what the missing sides of the transparency looked like. We had two clues.  One was the remains of a letter that was still attached to the side.  The other was a loose fragment.  In the image below, a possible location was the "N" in the second line down "FREE MEN !" that was located on the reverse side.  By tracing full letters, it was possible to speculate that the sides were also another version of the printed fabric that was on the back side.  Since  all of the cotton was printed, it shows that a number of these transparancies might have been produced. 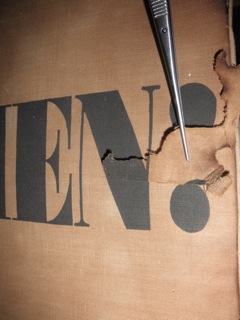 While positioning the tracing next to the two sizes of "F", the fragment is closest to the "F" of "FREE MEN!" The width of this phrase matches the width of the missing side.  The mystery had been solved.  But figuring out what the missing sides said would not alter the final exhibit of the piece.  The missing sides were covered with a fill fabric (above left image) to blend with the front and back.  For more info on the Wide-Awakes, the Columbia County Historic Society please visit the links below. 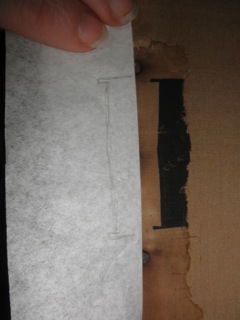