Banners have been around forever, or at least a couple thousand years.  It is said that one of the earliest accounts of their use is of Moses employing banners to keep the multitudes organized as they made their way to the Promised Land.

Banners had (and still
have) one purpose, if you want to say something, you put it on a banner and hang it up for the world to see.  Banners have been used to make political statements, they tout success, they pay homage to heroes.  Such is the case with Firehouse Banners.  Several examples exist from the Victorian Period.  A firehouse banner usually has the fire department name on it, and as you would expect, it was hung proudly in the firehouse.  However, the firehouse banner cannot be pigeon-holed into the past, as evidenced by the "Angel" banner which now graces some of the FDNY firehouses whose firefighters were lost on September 11th, 2001.

Spicer Art Conservation treats banners each year, some political, some made in protest (see the "Down with the Rent" banner above), and numerous trade banners (see right) made for parades and rallies.  Recently,  SAC received a beautiful, two-sided, velvet banner (a truly unique choice in fabric), which had remained in the attic of the Morrisville, New York Firehouse for perhaps 100 years.  The banner was for the most part intact, as was the stitching which composed the embroidery on one side, and the painting which made up the image on the reverse.  However, the colors had faded significantly and it was very dirty.

The good people of Morrisville wanted to restore their banner and, if possible, rehang it in the firehouse.  To do this the banner needed to be housed in a way that would protect it.  Remember though, this is a double sided banner.  If it is framed, one side will be lost.  The solution?  A two-sided display case.

The banner is to hang in the display case using the original brass rings, rod and finials.  The stress points caused from the junction where the ring meets the fabric and is stitched to the banner was deemed too fragile to re-affix the rings.  Another solution was needed. 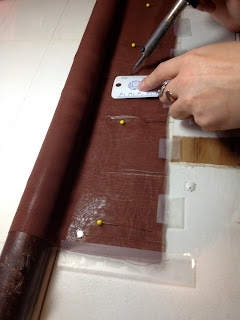 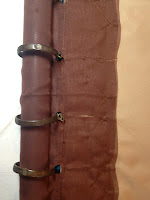 The sheer fabric was cut in a "comb" like pattern.  The top of each comb, was seared with a soldering iron to create a perfectly round hole, which the ring would fit into.  Additionally, the color of the sheer fabric was intentionally chosen to create a near match to the rod, allowing it to become virtually invisible once the brass rings surround it.  The outcome is a banner that is conserved and displayed in a way that is beneficial to the banner and pleasing to the people who found this lost treasure in the hopes it would not only be displayed again, but for a long time to come.

Posted by Inside the conservator's studio at 3:26 PM