The conservation of a 34-star American Flag


Americans have always cherished and proudly honored our Grand Old Flag. But it was not until 1916 when President Woodrow Wilson issued a presidential proclamation to establish June 14th as national flag day. June 14th is significant as it also commemorates the same day in 1777 when, by resolution, the Second Continental Congress adopted the official flag of the United States. And of course the US army also celebrates their founding on this same day in 1775.

The flag has undergone a tremendous amount of change in the past 230 + years. Traditionally, each July 4th, the flag would be updated to incorporate any additional states. And so, as each state entered, a new flag with an additional representative star was born.

Let me take you back to 1861. Lincoln is president, the flag has 34 stars, and it will remain this way for just two short years.  (sidenote: A flag with 34 stars is very rare and no two are really alike because the "rules" for flag making were pretty loose - does this sound like another blog entry - yes! look for "Flags, Flags, and More Flags", in the next few weeks). The United States battles within its own borders in the early days of the Civil War and each citizen is trying to do their part. Enter William Clark, owner of the steamship Oregon who tenders his boat free of charge to move the sick and wounded and transport soldiers up and down the Hudson River bound for New York or Albany. Clark’s daughters, Sarah and Clara, hand-stitch a flag of substantial proportions to fly from the Oregon. The flag, measuring 109” x  80”, now makes its home at the Columbia County Historical Society in Kinderhook, New York.

By 2010, the flag was in tatters and desperately required conservation. The flag had two main challenges: its condition and its size.  Measuring over 9 feet in length, working on this flag was going to require a lot of room and some pretty big tables. As we laid the flag out, it was clear that it needed to be secured from shifting or moving, yet this had to be accomplished in the most delicate manner.

ENTER MAGNETS. Have I mentioned how indispensable magnets are in a conservator’s toolbox? (If you are not using them now in your treatments, you must start!) 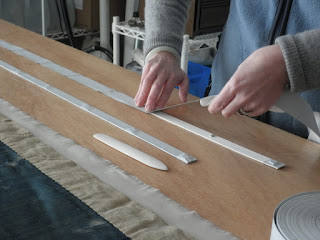 While the normal course of action here would call for double sided tape, we opted for a smarter approach. The outside edges of each table the flag rested on (three tables total pushed together) were fitted with a metal strip (see photo below, metal strip has holes and is beneath the backing fabric). We then prepared 4-ply mat board strips by placing small, rare-earth, magnets at even intervals. The magnets were then secured to the mat board by wrapping them in framers tape (this process is illustrated in the photo above). 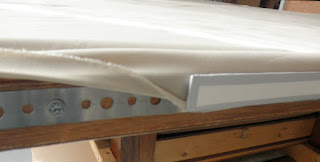 The entire perimeter of the metal-edged tables were then covered with the mat board/framers tape strips. By sandwiching the supporting fabrics between the metal strip on the table and the magnetic strips, we were able to create a fully stable edge that caused absolutely no stress on the object. Amazing, right? 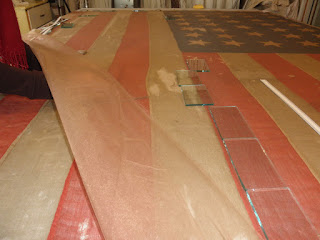 Ultimately, the flag was encapsulated using a custom-dyed nylon net. Utilizing this treatment enabled the piece to be conserved as the historical society intended it to be seen: allowing the original flag to be shown in its current state. The flag is now featured in a Civil War exhibit at the Columbia County Historical Society.

The use of magnets showed itself as invaluable in this step of the treatment as well. By placing the netting over the flag and then securing it in place with the magnetic “tape system”, we guaranteed the layers to be free from movement or shifting.  The net never had to be pinned to the already incredibly fragile fabric. Imagine the converse to this – hundreds of pinholes from the straight pins, which would have had to be used to secure the net to the flag! (Have we sold you on magnets yet?)

The use of magnets for an encapsulating treatment are an absolute necessity and we at Spicer Art Conservation, LLC will never do it any other way. Magnets are presenting their usefulness to us in a variety of ingenious ways, look for more examples in upcoming blog entries. In the meantime, check out our website –www.spicerart.com - to see how we used magnets to re-tuft a Hunzinger chair. 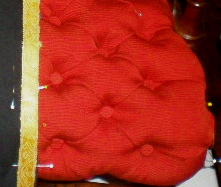 Magnets and upholstery? You betcha!

for more information about the Oregon's flag, Visit the Columbia County Historical Society’s website at: www.cchsny.org and select "collections" from the left menu.

Look for Gwen's book, "Magnetic Mounting for Art Conservators and Museums",  available in 2018.
Posted by Inside the conservator's studio at 2:40 PM